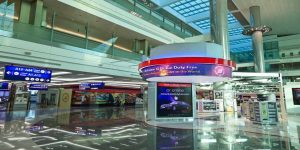 Passengers arriving at or departing from the Dubai International Airport can finally say goodbye to long queues with the installation of more smart gates that will allow passage through immigration within seconds.

With the installation of 120 new-generation smart gates at all terminals, the General Directorate of Residency and Foreigners Affairs (GDRFA) in Dubai is expecting around 40 per cent of travellers to use the smart gates.In operation since last month, the third generation of smart gates ensures the travellers no longer stop at passport control at one of the busiest airports in the world.

Equipped with the latest face-recognition software, the smart gates do away with the passengers’ personal encounters with passport control officers, clearing travellers with approved biometric, electronic passports or identification to walk straight to the baggage claim area after deplaning.

“It is the face of the future for the first time in the world. Passengers will cross the gates smoothly and there will be no need to stand in queues to get the passport stamped. The smart gates ensure that each traveller will only spend nine to 20 seconds to pass through,” Major-General Mohammad Ahmad Al Merri, director-general of the GDRFA, said.

About 4.5 million passengers have used smart and electronic gates since January this year.

The ‘biometric border’ walkway takes a 3D scan of people’s faces as they enter the airport and checks it against a digital passport using the face-recognition software.

The digital passport, created for the system, contains information from the electronic chip in physical passports, as well as additional details including fingerprints, iris scans and face-recognition data.

“Now, any passenger can be registered in the system as soon as he walks through the normal passport control so he can use the smart gates on his next trip,” Brig Al Shanqiti said.

To pass through the gates, a passenger needs to scan his passport at the gate and look at the camera to scan his face.

“Emiratis and residents [comprise] 45 per cent of the travellers in Dubai. Our target is to have people cross the smart gates in an easy and fast way,” Al Shanqiti added.

Major Khalid Al Falasi, assistant director-general of Smart Services at GDRFA-Dubai, told Gulf News that the new gates are more advanced than any gates in the world.

“The new smart gates are unique. Once the traveller’s face is scanned and when he returns to the airport the next time, (through face recognition) the gates will open without the need to take fingerprints or examine the passport. This is the future,” Maj Al Falasi said.

The system will also enable travellers to forgo the additional step of getting their passports and boarding passes manually checked by a security officer before they go through immigration, as these checks will be automatically integrated within the biometric validation when the travellers pass through the new smart gates.

However, children under 15 will not be able to avail of the new smart gates and an officer will attend to their procedures at the normal gates.

120 smart gates in all Dubai airports

9 to 20 seconds to cross the smart gate