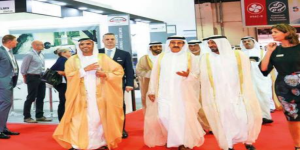 Shaikh Ahmad Bin Saeed Al Maktoum, president of Dubai Civil Aviation and CEO and Chairman of Emirates airline and Group, officially inaugurated the Middle East’s largest construction event, The Big 5, and the co-located Big 5 Solar in Dubai. The also took a tour of the exhibition that covers the entire Dubai World Trade Centre area, hosting over 2,500 exhibitors from 60 countries this year.

Dubai: Payments in the construction industry are now getting settled more or less immediately as project owners and contractors try to clear their outstandings ahead of January 2018 when VAT comes into effect. Once VAT is rolled out, all such transactions — even those entered into before January — would come under the 5 per cent charge, industry sources say.

“Everyone in the UAE construction industry has only one thing to say: Invoice now,” said Mohammad Mustafa, Managing Director at the project consultancy Emsquare. “A bit of the rush to pay off invoices has been there for two to three months, but it’s only in the last month that it’s become this obvious.

“Every contractor is putting in provisions in all new contracts that anything applied on VAT will have to be paid for by the clients. Everything other than our service fees, of course.”

For anyone involved in the construction sector, the immediate pay-offs represent quite a bonanza. The industry has been so used to the 90-120 day credit periods, and over the last two years, this had even been stretched further.

But once VAT is effected, it will go back to the older — extended — credit periods. For now, UAE’s contractors and building material suppliers are seeing cash in hand right now.

“We had a client who was to finish his three projects later come in and instruct that all of the building material requirements for these had to be on order before December,” said Mustafa. “There’s a bit of hoarding taking place on the materials side, especially for ongoing projects. At the end of the day, these represent money saved.”

Thankfully, for the construction industry, there has not been any price surges on key building materials despite the rush to place orders.

“Except for steel rebar, prices on the other materials have been steady for the better part,” said Alireza Alladin, Director at GCP-Unitas which owns quarry interests in the Northern Emirates. “Steel has gone through a 10-20 per cent price gain since summer, and that had more to do with the international situation than anything at the local/regional level.”

There is widespread anticipation in the steel futures market that the US government could finally launch a infrastructure redevelopment programme, a cornerstone of President Trump’s pre-election pitch.

Where possible, local contractors continue to source cheaper steel from China rather than buy from mills in the UAE and elsewhere in the Gulf. With the VAT in place later, sources say that cheaper — but with the same quality — import options will become even more vital.

“Over the next three years, there will be cost inflation across the construction industry because of the sheer number of development and infrastructure works happening at the same time, including the many directly related to Expo 2020,” said Alladin. “Most real estate developers also have a full portfolio of projects that have just launched construction on-site. Where possible, clients will not let project costs get out of hand.

“In the domestic market, there has been a definitive increase in demand for building materials. We are looking at a 15-20 per cent increase in project activity/tenders during 2018.”

Place orders now and get them in before January 1

The second-half of 2017 did see a spike in new construction activity hitting project sites in the UAE. The fact that the UAE Government gave sufficient lead-time on their VAT roll-out plans helped project owners and contractors to prepare accordingly.

One benefit of an early construction start was to place orders on building materials and other key supplies before the January 2018 deadline for VAT. “There is only a limited period between placing an order, getting the delivery now and not be liable for VAT,” said Mohammad Mustafa of Emsquare.

“It remains to be seen what the situation will be on those orders place before January 1, 2018 and where the shipments will reach UAE ports only after January. Will VAT be applied in such cases?

“Lead-times on delivery will become crucial in deciding orders over the next few days. Where possible, contractors will place orders with those who can promise the shortest lead-times.

For information on the real estate sector within the UAE, please visit our sister site, getthat.com.