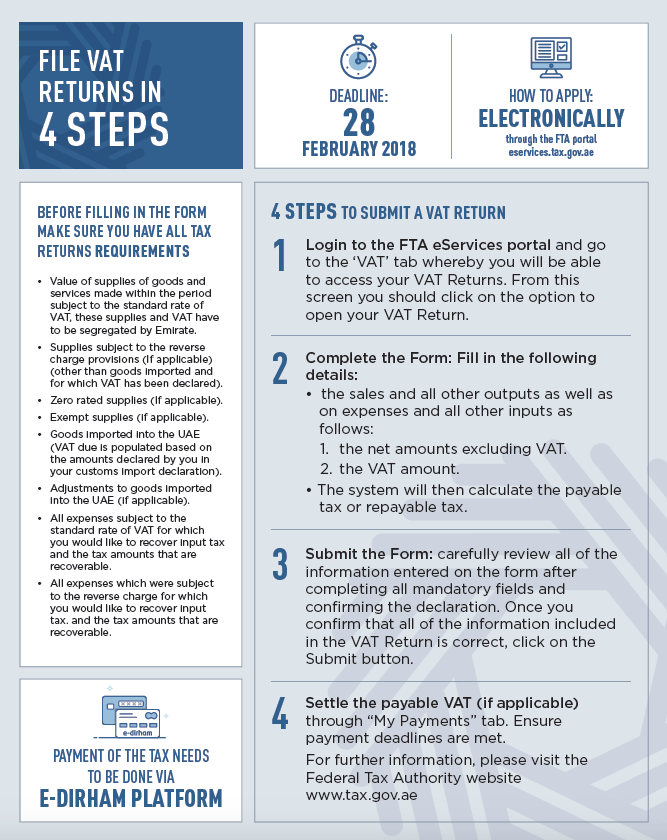 FTA says registered companies should check its website to see if they need to file on a monthly or quarterly basis.

The Federal Tax Authority (FTA) in the United Arab Emirates has produced a guide advising companies on the process for filing tax returns online, following last month’s introduction of value-added tax (VAT). The authority said its campaign will feature on digital, social and other media channels and is aimed at introducing its new online tax returns system, which went live earlier this month, to businesses who have registered for VAT.

It sets out the four steps (highlighted in the infographic below) that companies need to take in order to file their returns online.

Khalid Al Bustani, FTA director-general, said that the success of the UAE’s tax system was a shared responsibility requiring strategic collaboration between public and private sectors.The FTA said information about tax periods is available on its website, and that registered companies should check the site to see whether their first tax period ended on January 31.

All six Gulf Cooperation Council countries signed an agreement in 2016 agreeing to introduce VAT, but so far only the UAE and Saudi Arabia have done so.

For more on the introduction of VAT to the GCC, click here. 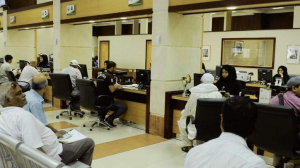 Will you need it or not? Here are the answers.

The new requirement of having to produce a ‘certificate of good conduct’ to obtain work visas in the UAE comes into effect from today.

Earlier this year, a committee in charge of implementing the Cabinet resolution had announced that the certificate should be issued by the country of origin of the person, or the country where he/she has been residing in for the past five years. It should then be ratified by the state’s mission, as well as the UAE Ministry of Foreign Affairs and International Cooperation.

The certificate will only be applicable for the worker concerned and not his/her dependents. Those coming to the country on visit, tourist or student visas needn’t get the certificate either.

On Saturday, when Khaleej Times contacted the Dubai Police call centre to find out how to obtain the certificate, we were told that if an expatriate comes to the UAE as a new employee, “he/she will have to get a good conduct certificate from his/her home country before the visa can be issued”.

However, the official clarified that the certificate is not mandatory if an existing resident is switching jobs within the country. “But it’s up to the employer if they still want a certificate of good conduct issued by the local police from the employee.”

When the decision was announced, the committee, which includes representatives from multiple government agencies, said the action comes within the framework of the efforts of the UAE government to create “a safer and more sustainable society”.

“Making the UAE one of the safest countries in the world is the government’s main aim,” the committee noted in a statement.

Major-General Khalil Ibrahim Al Mansouri, assistant commander-in-chief of the Dubai Police for criminal investigation affairs, had earlier said that the certificate is aimed at preventing and reducing crime in the UAE. The new procedure will also help those involved in financial cases to clear their names and come back or continue to work in the country.

“The new requirement will definitively prevent criminals from entering the country … The state has the right to protect society and its members,” he said.

Major-General Al Mansouri also pointed out the Sharjah incident involving the rape and murder of a nine-year-old Jordanian boy, who was murdered by a person who had undergone a sentence in his home country for his involvement in dangerous criminal acts.

All you need to know about the new requirement

It is a certificate issued by the country of origin of an expat who is coming to the UAE on a work visa. If he/she had been residing in any other country than his/her home country, the expat needs to produce the certificate from that country.

How can it be obtained?

It is usually issued by the police or ministry of external affairs in a resident’s home country. It then needs to be ratified by the state’s mission, as well as the UAE Ministry of Foreign Affairs and International Cooperation.

Is the certificate required for switching jobs within the UAE?

It is not mandatory for residents switching jobs within the country. However, it is up to the employer if they want a new recruit to produce the document.

What is the aim of the document?

To ensure a safer and more sustainable society, according to the committee in charge of implementing the Cabinet resolution. The Dubai Police said the requirement will help reduce crime.

Do residents’ dependants have to get the certificate?

Is anyone else exempted from obtaining it?

Those coming to the UAE on visit, tourist or student visas.

Applying for a good conduct certificate in UAE

Certificate – From outside the country – Dh300